Undoubtedly, the Grottani are proud that their country is the birthplace of our venerable Founder Father Gregory Fioravanti. However, so are we, his daughters: Franciscan Missionaries of the Sacred Heart. The grateful memory of the 200th anniversary of the Founder's birth has involved us directly from all parts of the world. A truly evocative image that makes one think of the first missionary sisters whom Father Gregory accompanied with special attention to be sent to the missions. Therefore, we have the joy of living this "continuity" of the patrimony of the charism, a gift of the Spirit to the whole Church.

The feast was lived in the family, in ecclesial and Eucharistic joy. In the Province, we made an appointment online and we all found ourselves excited to follow the solemn Eucharistic celebration from Grotte di Castro. The red thread that connects us is that of the grateful memory of the past: from the writings of the Founder, from the documents of the beginnings and from the testimony of the first sisters, we discover the vital inspiration for our time. Accepting the challenges of the present with one's own charismatic identity is the existential fabric in which we find ourselves living and working as Franciscans and missionaries. The figure of Father Gregory is an invitation for us to turn our gaze to the future and to travel a renewed path in harmony with the Church, capable of giving concrete answers to the new generations. The 200 years are like a river of graces that flows through our Religious Family, like a small seed that bears abundant fruit. As a Province, in the days leading up to the bicentenary feast, we had the opportunity to follow online a relevant conference on the heroic profile of Ludovico Fioravanti, presented by Sister Beatrice Skorti from Lebanon, a member of the historical commission. Let us listen to her,

On April 3, 2022, I had the joy of being able to pass on the treasure of the legacy of our Venerable Founder Father Gregory Fioravanti to the Sisters of the Province of Saint Elizabeth. It is true that I have worked for years on the history of the Province and not on that of the Founders. However, one cannot exist without the other, just as the tree cannot grow without roots and leaves without sap. Therefore, I got ready to talk about these roots and so that the facts were not my fantasy, I made use of the documentary material collected during the research.

Ludovico Fioravanti was born in Grotte di Castro (Viterbo) on April 24, 1822. Documents reveal that he receives the sacraments in due time like all Christians of his time and lives as a normal boy. He was orphaned of his mother at the age of six. Let's imagine how this absence affected his character as a child and adolescent. Soon he leaves everything and goes to Viterbo where a new life begins that will lead him to Venice and slowly enters our history.

Let us take the Seraphic Father St. Francis as an example. It was not his birth or his future mission, not even his skill as a knight that proclaimed him a saint but his conversion and listening to the Crucifix. He strips off, lives according to the Gospel, embraces the cross, and follows Christ until death. What does this comparison tell us? It tells us that the saints are first of all human persons who transform humanity into a way of holiness. This is how we want to celebrate the 200th anniversary of the birth of Ludovico Fioravanti. His birth is important because it reveals his humanity. He was born on a spring day, grew up, entered the convent, studied, became a priest, professor, provincial superior, a normal, calm and always obedient Franciscan. We do not find anything extraordinary in the documents. God leads him to a providential meeting with the Foundress Laura Leroux and thus, silently, he becomes part of our history. From that meeting a charism was born in the Church and who knows ... a saint in heaven!

We are interested, first of all, in the role of Father Gregory from that historic day of his meeting with the Duchess. It is October 20, 1859. She is 27 years old, he 37 years old with various experiences. Mons. Battisti, who started the trial of Father Gregory in the Diocese of Udine, will say, "perhaps he would not be provoked to the exercise of virtue to a heroic degree if God, Lord of history had not put the Duchess Laura Leroux of Beaufremont in his way.“

Father Gregory, speaking of that encounter in historical memories, places it in the light of Providence and says, "The noble woman of Paris was the instrument that God used to start the work". He then observes the beautiful expression "wonderful are the traits of Divine Providence to which no one has the right to ask why this is in this way and not otherwise ". Today we must understand the true meaning of the words because Father Gregory writes them towards the end of his life and they are the result of an experience lived at times with bitterness.

The Calvary of Father Gregory begins when the Foundress decides to leave the institute . Are his fears and anxieties about the initial success, the beauty and richness of the work come true: "maybe it will be God's will"? With steadfast faith and in silence, the humble Franciscan walks in darkness, obedient to the will of the superiors. He becoms a heroic example when it comes to saving what can be saved. On the one hand, the young sisters suffer from hunger, disease and death. On the other hand, the monastery is in danger of being sold, of suppression. Together with his daughters, he holds out his hands for alms, knocks on the door of bishops, mayors, cardinals, sends letters trusting in Divine Providence, without neglecting the preparation of the sisters for the missions.

Father Gregory patiently faces a torrent of stormy and tragic events. He prepares himself with constant commitment for the conformity of Christ Crucified. The trials purify him, strip him completely, he remains alone, on the sidelines, for 17 years until the day of his death. He endures everything with faith, with patience, with strength, with trust in God. Many of his writings (letters to the sisters on mission) reveal that he was a man of prayer and did not accept that his daughters neglect prayer for any reason. In the first letters exchanged with Father Theophilus, when the first missionary sisters arrive in Constantinople, we note the lament that those daughters of Gemona, very kind, very polite, very Franciscan have a defect: "they are more Magdalene than Martas" and that this makes the missionary life in Constantinople was rather difficult. Father Gregory is very explicit  he writes, the sisters cannot be good Martas if they are not first good Magdalene. The charism entrusted by God to the Duchess must not change even one iota. “The sisters must also help the missionaries with prayer”.

Who knows how many times Fr. Gregory, during his last stretch of life lived in hiding, solitude and abandonment; he has placed everything at the foot of the Crucifix. From contemplation, he draws the resolution to adhere unconditionally to the will of God for the good of his daughters. In front of the Crucifix, in the embrace of the Madonna, he goes out in silence, leaving us all the paternal blessing. “Yes, I bless all of them, present and future ones”.

More than with words, Father Gregory Fioravanti, our Venerable Founder, speaks to us with his life, actions and silences; with their own charity, attitudes and virtues. His precious heritage is the seal of his holiness, which we hope, will soon be  recognized  and proclaimed by the Church.

View the embedded image gallery online at:
https://www.francescane.org/en/from-grotte-di-castro-to-the-world/item/1985-celebration-of-the-bicentenary-of-the-birth-of-the-venerable-father-gregory-fioravanti-in-the-santa-elisabetta-province#sigProId55a8e93857
Last modified on Tuesday, 18 October 2022 14:26
More in this category: The Provincial house and lay associates celebrate the 200th anniversary of Father Gregory » 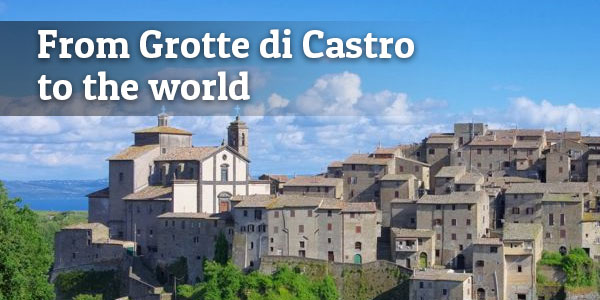 You shall be my witnesses

Missionary Mandate “You will be m…

What dream do you have in your hear…